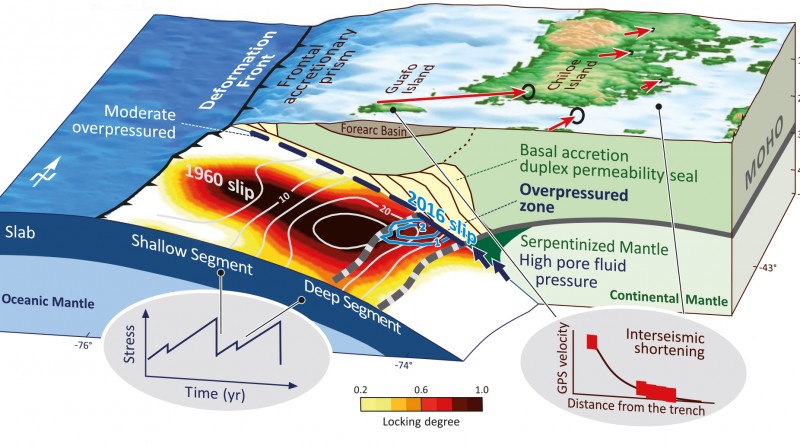 The 2016 Mw 7.6 earthquake of Southern Chile was the first large earthquake to occur within the rupture bounds of the great 1960 Mw 9.5 Valdivia earthquake, the largest ever observed in historical times. Using GPS, InSAR, gravity, seismic reflection, and geological data, Marcos Moreno and colleagues from GFZ as well as Chile show that the 2016 earthquake occurred at the deep boundary of a persistent asperity on the interface between the subducting Nazca and overriding South American plates, where both plates are coupled and not sliding past each other in spite of the high convergence velocity of 68 mm/year. This asperity broke during the 1960 Chile earthquake b has since healed and recovered. Their study, published in Nature Geoscience, presents a mechanical model in which the highest stresses gradually accumulate at the deeper edge of such an asperity. The 2016 event released these high stresses. Depending on the frictional parameters of the asperity and the deeper segment of the plate interface, the model predicts the failure times of the deeper and shallower portions of the interface.

According to this model, the shallower failure is representative of a great event (1960-class) and the deeper event represents a large earthquake (2016-class). Given the lag time of 56 years since the 1960 event, the model suggests that the pressure of fluid (i.e. largely water) at the plate interface zone is close to lithostatic at the deeper interface and is slightly lower at the shallower interface. If the water pressure at the plate interface zone becomes as high as the pressure of the overlying rock column, the strength of the rocks at the plate interface becomes practically zero – an effect akin to aquaplaning will initiate eventually triggering an earthquake. It is proposed that the development of this modelling strategy could enable the estimation of critical failure thresholds for other mapped subduction asperities where subducting and overriding plates are currently locked.